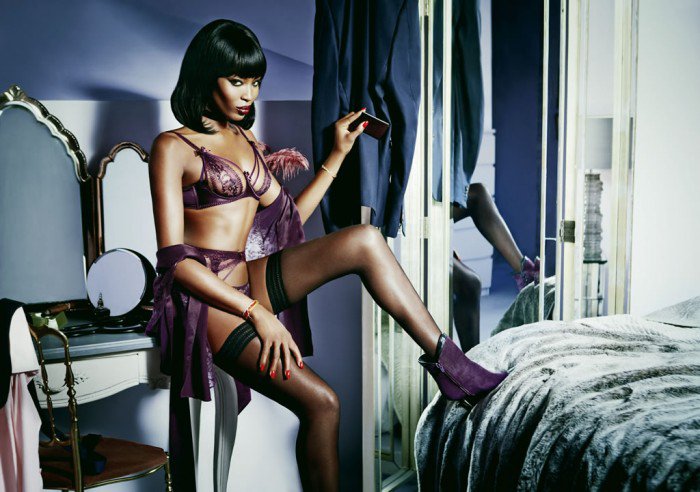 Having been the face of numerous brands before, Naomi Campbell has now lent her face to the luxury lingerie brand Agent Provocateur.

The brand’s new Spring/Summer 2015 campaign starring the 44 year old model is every bit as sexy as their last, this time boasting a thrilling, film noir-esque vibe. Shot by Ellen von Unwerth, the campaign is inspired by movies like David Lynch’s Lost Highway and Brian De Palma’s thriller Body Double, with Campbell portraying the perfect femme fatale. This campaign is all about a woman that AP calls complex and many sided- coy, duplicitous, siren saint.

Naomi is every bit the sultry siren, armed not only with shovels (blood stained, we imagine) but also with daring bedroom eyes and a supermodel body. The lingerie itself is a riot of brightly colored lace and peek-a-boo sheer panels that makes Naomi- the original diva- a next level Hollywood goddess.

Looking at this campaign is making us want to pull out our noir movie collection! It’s no surprise that the brand chose Campbell to showcase their saucy lingerie, but what is a surprise is Naomi’s uncanny ability to remain relevant in the fashion industry where youth is everything. Campbell certainly is evidence to the fact that a classic face never goes out of style despite the rise of younger “It” girls like Cara Delevingne and Kendall Jenner.