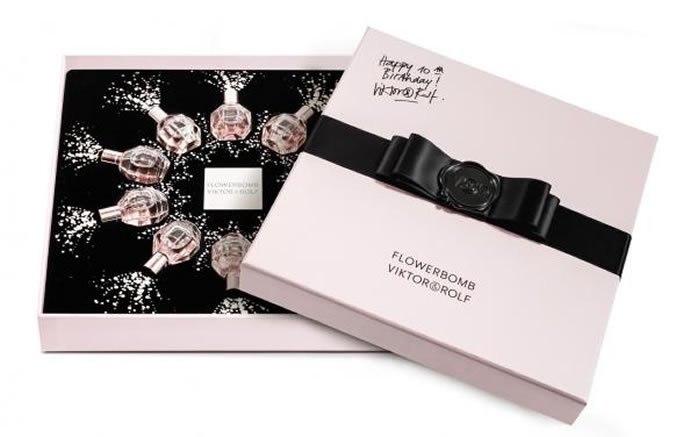 Dutch fashion house Victor & Rolf’s most famous debut so far has to have been the Flowerbomb, a women’s perfume which was first introduced to the world in 2005. Its floral mix of jasmine, rose, orchid and patchouli and sweet hints of green tea and bergamot made it a quick and lasting favorite. Over the years it has been described as an unforgettable fragrance, whose whiff you’d be able to point out a mile away. The perfume was even featured and immortalized in the song Lotus Flower Bomb by Wale and Miguel. 2015 is a special year for the brand its iconic fragrance because it marks the 10 years since the aromatic inception and to celebrate the legacy, Viktor & Rolf have created a special box set of 10 mini bottles of Flowerbomb to entice fans to also join in the celebrations. The greyish-pink box is decorated with a black bow on the outside, while on the inside the sweet bouquet filled pink bottles lay on a black bed surrounded by flashes of sparkles and fireworks. The limited edition kit is nothing short of glamorous and speaks elegantly of the festivities of the milestone and would also make a perfect gift for any kind of woman.