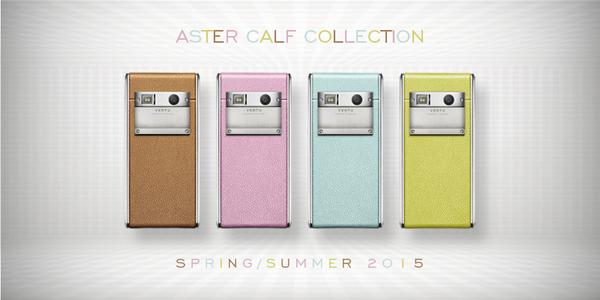 Vertu’s handsets get a new look for the warmer months

Stepping into the warmer months of the year, two of Vertu’s signature mobile models have undergone quite the transformation. Introducing a new range of shades that have a distinctly sunshine fuelled feel to them, Vertu’s Aster and Signature Touch have both had a summer makeover, and we must say that the new colours are very attractive indeed.

The Aster is already a masterpiece of mobile phone technology. Handmade in England, the hand brushed sound bar, ruby key and hand turned screws are the very definition of impeccable craftsmanship, and that’s not even taking into account the impressive technology encapsulated within the device. A lightning fast processor and a crystal clear camera are just two stand out features, and with a slew of others coming as standard, the Aster has been heralded as one of the finest phones available.

Now for the sunshine months, this impressive piece of technology has taken on a new wardrobe, reminiscent of the colours of Italian gelato. Soft pastels in pinks and berry blues, creamy browns and minty greens are all part of the new calfskin leather colourways, pebbled to the touch and with durability that makes the material ideal for everyday use. Enclosed inside a matching Calf Slip Case finished with a debossed Vertu logo and sumptuously soft alcantara lining, the Aster’s summer look is nothing if not seasonally striking. On the other hand, the Signature Touch’s summer colours are more on the intense side. A powerful blend of cutting edge technology and bold aesthetics, the Signature Touch would look at odds in pastels, and as such has received a rather darker new set of clothes. Toted as one of the most technologically advanced phones to have been created, the Signature Touch was designed by Vertu to push the boundaries of their craftsmanship, resulting in a piece of technology that after being tuned alongside world experts and fitted with state of the art noise cancellation, looks and sounds as advanced as you would expect. Softening this bold aesthic, however the new colours give the mobile somewhat of a more individual aesthetic which will appeal to those who like to own objects with character.

Inspired by the canopies of English woodlands, the rich forest tones of the Night Forest colourway and the mesmeric chestnut hues of the Dark Scarlet design celebrate the season in a sophisticated manner. Both crafted out of shimmering lizard skin, these new colours combine with the technological prowess of the phone to create a handset that is truly unlike any other, and we must say, we wish we could get our hands on one.

The New Vertu Spring/Summer collection is only available at Vertu Boutiques.