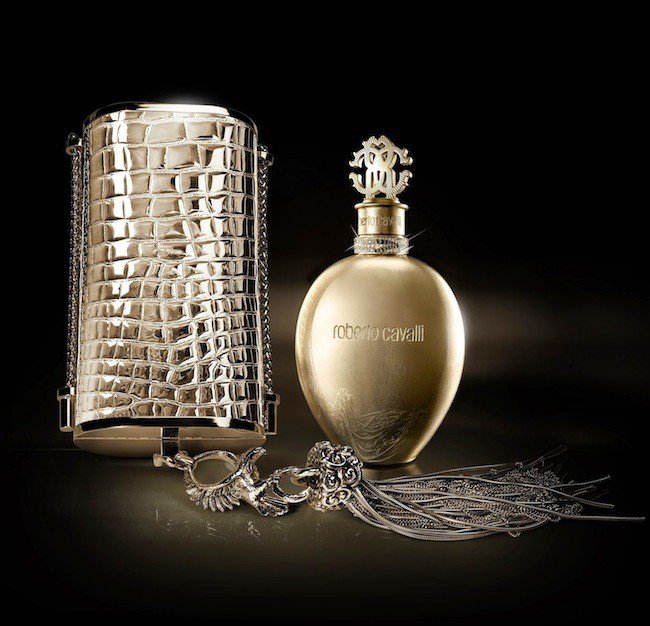 One of the most legendary and beloved flavors of the Italian brand Roberto Cavalli Eau de Parfum is the Roberto Cavalli. Since its launch in 2012 , each season launch a new version and triumphs . But for this summer 2014 version is limited to 3 copies and becomes an absolute gem. We talked about Roberto Cavalli Gold Edition, exclusive perfume of the season.

The new flacon is inspired by the designer Roberto Cavalli’s love for gold.

This limited edition stands out for its design and the materials that have been made ??. Its bottle and cap are shaped crown dipped in white gold, and found a small neck necklace adorned with 138 white diamonds and 121 black diamonds. This piece can be used as a ring or as a pendant on a necklace. In addition , an elegant minaudière made ??of brass gold plated and accompanied by an eagle-shaped tassel , made by the designer himself included . The box that appears combines an elegant brown satin lining with animal print.

The fragrance opens with sweet top notes of saffron, animal and woody oud as found in most Arabic perfumery in the middle and a mysterious incense at the base.

BOEING 727 Transformed into a Luxury Hotel Suite in Costa Rica