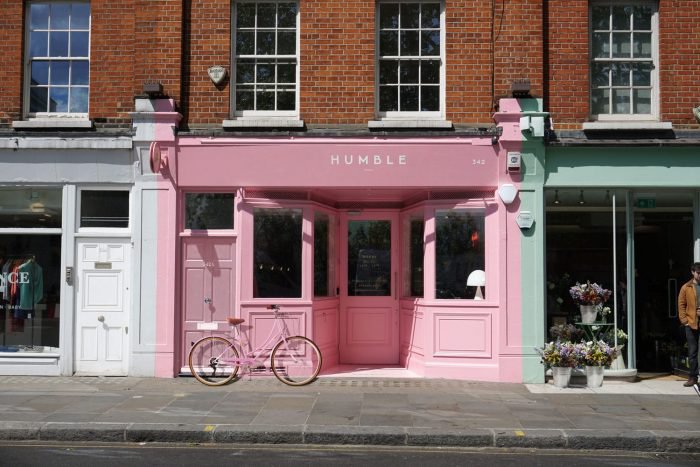 There are few better places for a picturesque pink, vegan pizza restaurant to spring up than the affluent London suburb of Chelsea.

With the surrounding boutiques and homes off Kings Road setting a standard of extreme prettiness, Humble Pizza fits right in.

The name would strike most as ironic given the daring pink-ness of the place and aforementioned fancy location. However, Alexey Kostikov and Chieh Huang of Child Studio set out to create an atmosphere of earnest hospitality. A staple of the vernacular of British postwar architecture, the Formica cafes that populated London’s West End in the 1950s inspired the design. Often run by Italian migrant families, the institutions served simple snacks in a pared-back modernist setting; often featuring pastel tones, laminate surfaces and cosy seating nooks.

“This was the beginning of the ‘cafe culture’ in London with King’s Road at the epicentre, attracting writers, musicians, photographers and bohemian characters of all styles,” says Kostikov. “Those cafes are nick-named ‘greasy spoons’ in England and not considered worthy of attention, but we saw a certain melancholic beauty in those spaces,” explains Huang.

Child Studio approached the Formica factory in North East England to recreate the discontinued ‘linen’ pattern popular throughout the 60s and 70s, resulting in a bespoke material unique to Humble Pizza. The interiors are clad wall-to-wall in the pink Formica, which also extends across counter fronts and tabletops. Cherry timber frames each laminate panel, with mosaic floors and neon signage being further nods to the past.
Vintage scouring resulted in the café being accessorized with classic mid-century lighting pieces by Poul Henningsen, Jacques Biny, and Luigi Massoni.

The exterior façade was stripped back to reveal original ornate features such as cast iron grilles, restoring character to the period timber shop front.
A long and narrow floorplan informed the layout, with banquette seats flanking one wall opposite a 5.5m display counter.

The all-pink interior is inarguably Instagram-friendly, however, Kostikov comments that their aim was to build a space with lasting substance.