Steve Areen builds a dome home in 6 weeks for 9,000 dollars.

Photographer and musician steve areen recently finished his dome house on a gifted piece of land on his friend’s mango field. His friend hajjar gibran and his son-in-law tao, local designers and builders, develop unique homes and influenced steve’s desire to create one for himself.  Without the availability of compressed earth blocks, concrete masonry units were used to build the primary structure, not unlike the construction of an igloo. Circular wooden blockouts are used to frame the cantilevering windows before the first layer of plaster is applied which effectively seals the interior. A final, vibrant layer of plaster is applied to the interior and exterior, giving the house it’s bright luster in the tropical forest. 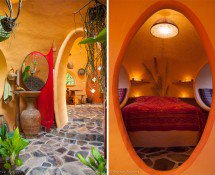 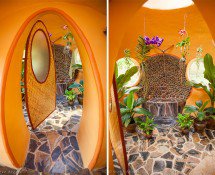 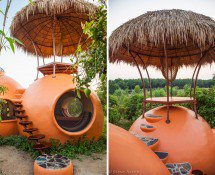 Six weeks and 9,000 dollars later, steve had his very own self-built home. The construction itself landed around 6,000 dollars with the finishes coming in at under 3,000, but steve also notes that the price is unique to the country. Hajjar, who has now developed a method for producing compressed earth blocks, hopes to begin a new campaign to continue building more efficient homes of similar styles.