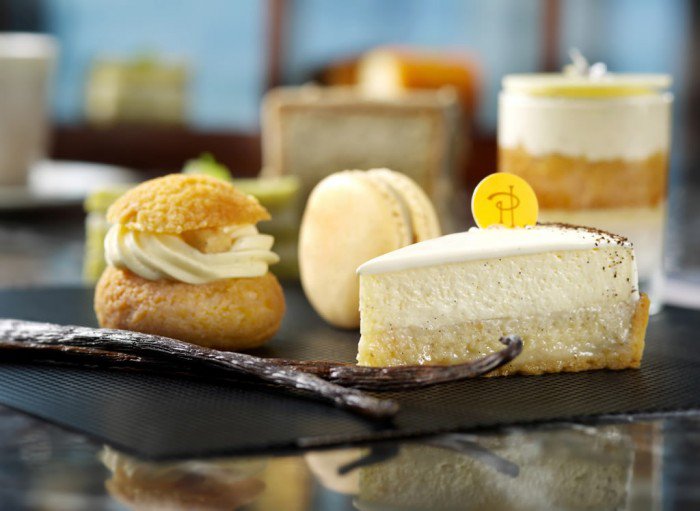 Building up on the Pierre Hermé Paris collaboration, Hong Kong’s Ritz-Carlton Café 103 will be introducing vanilla based treats for afternoon tea shortly, though only for a limited period.The themed afternoon tea is honoring the grand confectioner’s most recent Fetish Infiniment Vanille collection of sweets and pastry creations and his love for vanilla by creating a menu of sweet and savory items all made with some vanilla. Pierre Hermé’s vanilla creation has been concocted by blending three distinctly different kinds of vanilla beans; and the result of this special mix is the intensity of the beans from Mexcio, the floral hints from the ones from Tahiti and the oak undertones from Madagascar beans all in one heavenly-sounding creation. The limited afternoon tea menu will be incorporating the same thanks to Pierre Hermé Paris’ pastry chef from Japan and the hotel’s in-house executive pastry chef, along with the head food chef for the savory items.

On the sweet menu will be an assortment of pound cake, macarons, cream puffs and others along with the Tarte Infiniment Vanille, which is textured pastry tart filled with layers of white chocolate vanilla ganache, vanilla essence cake and vanilla mascarpone cream. The savory menu will have vanilla smoked salmon rolls, vanilla crabmeat sandwiches and forest mushroom tarts served with black truffle and vanilla sauce.

All reservations can be made at (852) 2263 2270 or restaurantreservation.hk@ritzcarlton.com