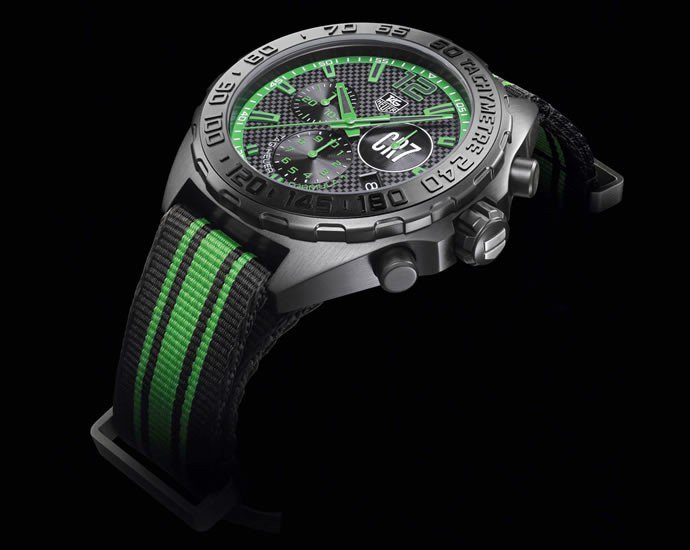 At the Baselworld expo this year, the Swiss brand has introduced a numbered limited edition timepiece in tribute to the three-time Ballon d’Or winner. Based on the Formula 1 Chronograph, the CR7 watch comes with a black and green color scheme to evoke the green of the football pitch. Along with vibrant green, the matt black finish lends this watch a distinctly assertive character. In addition to the color scheme, the other special design attribute of the CR7 includes a chequered-patterned dial, which gives the watch a distinct feel from the rest of the Formula 1 models. The TAG Heuer and CR7 logos on the dial in white contrast the black dial and pop out. The watch has a 42mm steel case coated in titanium carbide- the same material as the bezel. The perfectly matching green and black NATO strap is an integral part of the design of this chronograph. The chronograph is accurate to a tenth of a second, with the indication displayed by a small counter at 6 o’clock. The small counter at 9 o’clock displays the chronograph minutes, and the counter at 3 o’clock is for the current seconds. The CR7 Formula 1 watch will be priced at CHF 1,450 ($1,514 approximately) in Switzerland and go on sale in July this year.

The Most Expensive Ballet Flats In The World By Josephinas