Patrick Jouin and Sanjit Manku of Jouin Manku Design Studio created two restaurant spaces: one ambience for breakfast and another for the haute-cuisine restaurant, differentiated by the tableware, the lighting and totally different spatial organisations. As you enter the restaurant, huge stainless-steel domes reflect the crystals of the ceiling chandelier, the only retained element of the restaurant’s former design.

These unusual domes form banquettes where diners can sit, or screen off groups of tables and chairs. A witty and elegant twist on the traditional domed plate cover, they are made by award-winning artisans at Matinox and Le Floc’h.

On the left a timber alcove wraps itself around a single table where diners receive a dedicated service and benefit from greater privacy. The outside of the alcove is in unfinished strips of curved oak, assimilating the hull of a fishing boat. 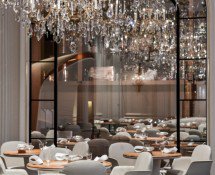 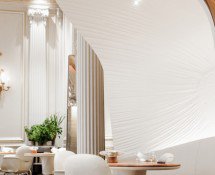 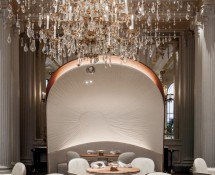 This piece of ‘micro-architecture’ is a theatrical presence within the overall decor, highlighting the character of the project. The alcove’s inner surface is finished with the imprint of the restaurant’s original screens, with embroidered details of vegetables- like spirits of the past.

The new bar at the Plaza sets its own scene, in a fresh, astonishing space

Here Patrick Jouin and Sanjit Manku have taken an audacious, creative approach. A tension has been set up between the ceiling and the bar to create a singular sensation. This dreamlike decor plunges the visitor into a very particular atmosphere that lends itself to emotion and encounters.

The ceiling disappears behind deep blue fabric clouds made from seamless, infinite material. The boundaries between floor, walls and ceiling dissolve in a clever play of lighting developed with Philippe Almon.

Behind the translucent arc of the resin bar, staff have a central island in polished stainless steel where they prepare cocktails from carafes set into the island, lit with glowing rings. The rich brown carpet and graphic pattern lightens as it nears the bar.

To enable a variety of configurations for socialising or privacy, the duo of designers used mid-height banquettes opposite the bar inset with occasional tables. Screens made in timber and stitched fabric wrap around areas of seating to create less formal areas. The elegant leather sofas and low chairs with their timber legs, at night blend into the surroundings created by the soft glow of the cast glass lights. 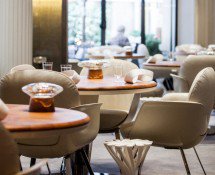 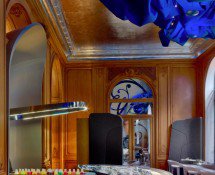 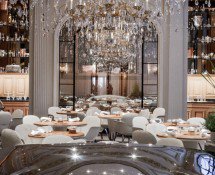 Finally, to add a personal touch throughout, Patrick Jouin and Sanjit Manku have designed three types of glass and a carafe. Made in Murano from blown glass, these containers provide the finishing touches that give the bar a unique character.

In the restaurant space, screens are also used to divide the space. Four luminous screens with polished steel ‘mirrors’ on the upper sections make the space feel larger while giving structure to the restaurant space. The designers have added a touch of mischievous humour in the redesign of the service trolleys, making them more casual, with white, spoked wheels like a bicycle.

At the end of the restaurant, cleverly hidden behind the central one-way mirrored glass, is a display of objects illustrating the history of “the art of tableware”. Representing French manufacturers, such as Christofle and Saint Louis, this treasure chest is a conversation piece and a tour through the history and heights of French savoir-faire.

This cabinet of curiosities is only visible to Alain Ducasse au Plaza Athénée diners, because in the mornings with the lights extinguished and the doors closed, its contents are hidden once more.

The visible grain of the solid oak table tops are left uncovered, with leather underneath, and stainless steel. These are an important feature of the restaurant meal, heralding a new era for the haute-cuisine restaurant, where purity and simplicity are part of each and every refined detail.