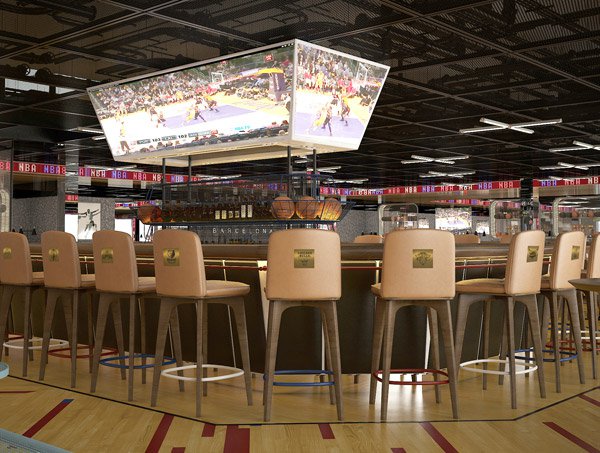 First NBA Café in Europe to open in Barcelona

NBA Café Barcelona, the first NBA destination of its kind in Europe, will open in Autumn 2016 in association with Spanish restaurant group AN Grup. The café will offer a unique dining and entertainment experience, capturing the energy and feel of the NBA in a state-of-the-art venue.

NBA Café Barcelona will be designed by Spanish interior designer Lázaro Rosa-Violán, whose work is displayed in more than 230 hotels, restaurants and retail spaces around the world. Covering 1,200 sq m, NBA Café Barcelona will feature a range of NBA imagery, memorabilia and merchandise, all complemented by an exciting menu offering quintessential American bar and grill favorites along with local and Mediterranean dishes. Multimedia displays including an arena-inspired, four-sided ‘jumbotron’ over the bar area that will show NBA highlights and programming so diners never miss a shot. Fans will also be able to meet NBA talent, including current and former players, mascots and dance teams during key moments throughout the year.

‘The NBA has a longstanding relationship with the fans and city of Barcelona,’ says Jesus Bueno, NBA EMEA vice president of Business and Basketball Operations. ‘NBA Café Barcelona will be a unique, fully immersive one-stop destination for fans of all ages and is another great way for fans to get closer to the NBA.’

Artemi Nolla Furriol, AN Grup president and founder, says: ‘NBA Café Barcelona is an amazing challenge for the AN Grup. We are excited to be working with the NBA, and look forward to creating a wow factor as it relates to the interior design, branding, menu and merchandise, in order to create an incredible experience for NBA fans. NBA Café Barcelona will be the city’s go-to destination for all things NBA, providing fans with the ultimate sports, entertainment and dining experience.

NBA Café Manila, the league’s first café outside the US, opened in April 2014.

Rihanna: Baddest bitch of the post-apocalypse