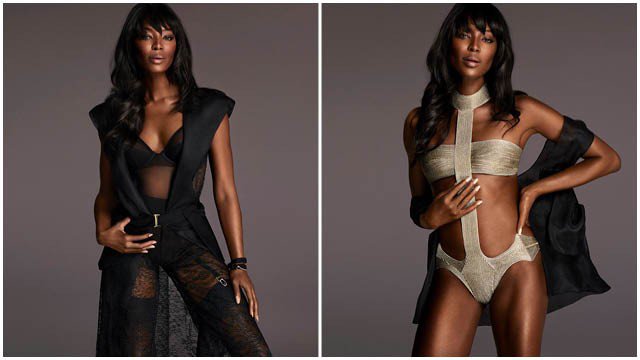 By starring in the new La Perla campaign, Naomi Campbell has made it clear that she is here to stay in the most sensual manner. The 45 year old English model has been in the industry since three decades and still confidently carries the crown of being one of the most sought-after supermodels in the world.

The leading lingerie and beachwear brand synonymous with “Made in Italy” luxury has unveiled two images of its latest fall/winter 2015 campaign that exemplifies Naomi Campbell’s supermodel status. Oozing sex appeal, Naomi faces the lens for Mert and Marcus under creative direction from Fabien Baron for La Perla Made to Measure Atelier collection. The new range comprises of peices that can be tailored for a custom-made fit. One image shows her flaunting her curves in the gold cut-out swimsuit. Dubbed ‘The Anchor’, this dazzzling key piece features a gold-hued bandeau bra, halter strap and central band running down to the torso to the anchor-shaped brief. The anchor is the inspiration for this shimmering golden one-piece featuring the soutache technique, perfect for a pool party worn with the sophisticated sahariana in silk organza. In another picture, Naomi Campbell wears the iconic ‘impossible lace’ black bra and knickers set from La Perla Made to Measure Atelier collection. The ‘impossible lace’ is the star of this look composed of the night robe and wide-legged trousers worn over the sensual suspender bodysuit with visible boning. The vintage gold and diamond hook adds a touch of luxury.