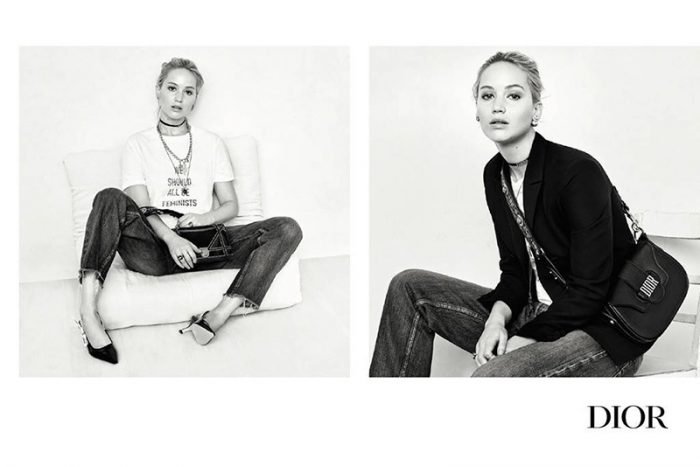 La Fille Américaine (The American Girl) is a playfully chic black-and-white short film directed by Fabien Baron. Lawrence is filmed wearing key Fall 2017 Dior pieces including the “We Should All Be Feminists” tee, a choker and a Dioraddict handbag.

In the film, the actress and Dior offer a tongue-in-cheek perspective on modern love. The film is narrated in French and runs reminiscent to a high school foreign language film.

The narrator tells Lawrence’s love story through minimal vocabulary words that are subtitled in English. The story line follows “la fille” (the girl) who smells “la fleur” (the flower) and receives “le texto” (the text) while sitting with her Dioraddict bag and J’adior Dior slingbacks.

Lawrence said in a behind-the-scenes video shot while filming, “It’s such an honor to represent Dior and be a part of the history of such an iconic brand.” She continued, “It’s a great experience wearing clothes that are designed by a woman who understands a woman’s body.”