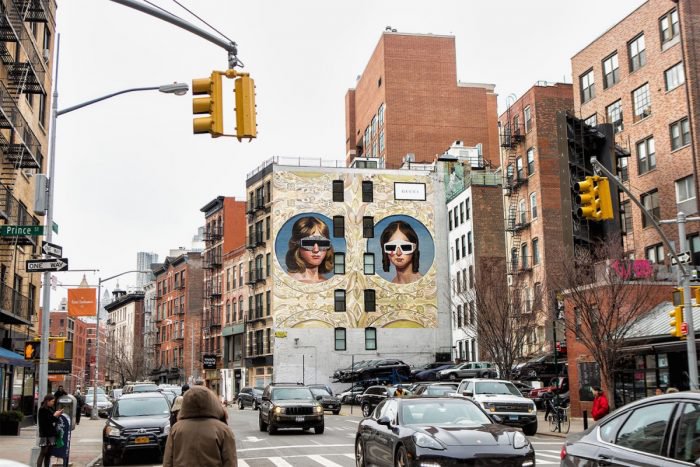 Gucci has unveiled a new collaboration with Spanish artist Ignasi Monreal as part of its 2018 spring-summer campaign.

Gucci has mounted a large-scale mural today on New York’s Lafayette Street, between Prince and Spring, and also in Milan, Italy, located at Corso Garibaldi’s Largo la Foppa, as part of the brand’s Spring/Summer 2018 campaign.

Gucci continues its creative relationship with renowned Spanish artist Ignasi Monreal.
Monreal’s artworks have appeared on Gucci’s Art Walls in Milan and New York and, in a first, they are due to debut in Hong Kong, starting mid-February.

The Spanish artist recently collaborated with the brand on the Gucci Gift Giving campaign and previously created Art Walls for the Gucci Bloom fragrance and for the fashion house’s eyeglass collection. After becoming the first major fashion brand to produce its very own custom animoji, the legendary Italian fashion brand has revealed plans for another collaboration with Monreal as part of its Spring/Summer 2018 promotional campaign.

Setting their sights on New York and Milan, Gucci and Monreal have put together new Art Walls based on the label’s Spring/Summer 2018 lineup. The New York Art Walls imagery revolves around the most recent Gucci eyewear, while the Milan iteration introduces a piece of art influenced by Jan van Eyck’s popular 1434 painting The Arnolfini Portrait and Hieronymus Bosch’s The Garden of Earthly Delights. Colossal Media helped put together the New York Art Walls, while European advertising powerhouse Urban Vision helped bring the Milan version to life.

You can take a look at Gucci and Ignasi Monreal’s new Art Walls for brand’s Spring/Summer 2018 campaign above, and visitors can expect the displays to run for about two months. The New York Art Walls are located on Lafayette Street in Manhattan’s SoHo area and the Milan piece is located at Corso Garibaldi’s Largo la Foppa.