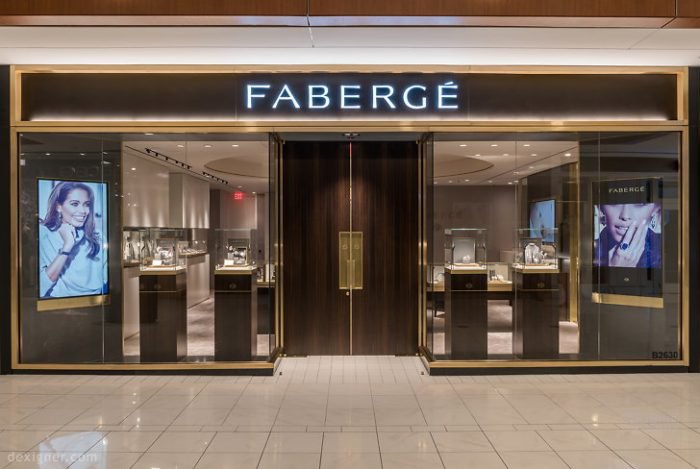 Fabergé, a brand synonym with luxury, has opened its first Texan retail boutique in The Galleria.

SHH was comissioned to create a store that embodies the brands’ luxury ethos and delivered to a destination for discerning international clientele. Led by Brendan Heath, SHH Associate Director, the SHH team designed to paired back retail space, quietly sympathetic to the rich jewelery on show while integrating subtle design accents that pay homage to historic Fabergé brand marques.

“Fabergé jewelery is so rich that the design of the space needed to be quietly sympathetic rather than a competitor to it; a soft muted ‘jewelery box’ for vibrant contents,” Heath explained. “The best way to describe the atmosphere is comfortable, it was critical to create an environment in which customers would feel comfortable and relaxed.” Materials of wall back to just timber, brass, suede, lacquer and leather. “One of the fundamental brand marques is a gold line, homage to the first imperial egg, the ‘Hen Egg’ that Faberge made in 1885. That was a key element that we drew through into several of the interior selections and design choices to draw a line between Faberge’s renowned history and its continued legacy today.” The circular chandelier is one of the key stand features in the center of the room. SHH designed the show stopping piece in collaboration with Wired Custom Lighting with bespoke details. The intricate and highly skilful technique called ‘guilloche’ was championed by Peter Carl Fabergé in the nineteenth century and this has been translated into the delicate structure of interlaced chandelier glass. The gold hoops of the chandelier are a reference to the original ‘Hen Egg’ and the joint of the hemisphere is highlighted in gold too, again to nod to the first imperial egg. The unusual circular coffered ceiling with a gold line painted around its upstand is another reference to the imperial gold Fabergé egg.
Contemporary designer chairs by Italian furniture manufacturer Molteni were used throughout the store reflecting the subtle, neutral color palette of the walls and carpet that allows the colors of the striking Faberge enamel guilloche and gemstones to take center stage. All the joinery in store is bespoke for the project and a signature ‘Egg Bar’ was created to showcase the colorful egg charms and pendants.

“The jewelery was to be treated more as exhibits on display, as in a gallery or museum, which drove the design of the showcase,” said Heath. “‘Gold’ brass detail features on all and the gold lines on them are another reference back to the imperial egg brand brand The showcases were also designed to not impose themselves on the space, which is why they have an open base allowing space to flow around, and through, them.” Whilst being in keeping with all the jewelery showcases, the ‘egg bar’ has a privileged design, set against a panel that is integrated into TV within it, to be used as a vehicle to show the jewelery being worn. Due to the small size of the ornate eggs, the visual film gives an opportunity to highlight the detail so it can be seen and appreciated.