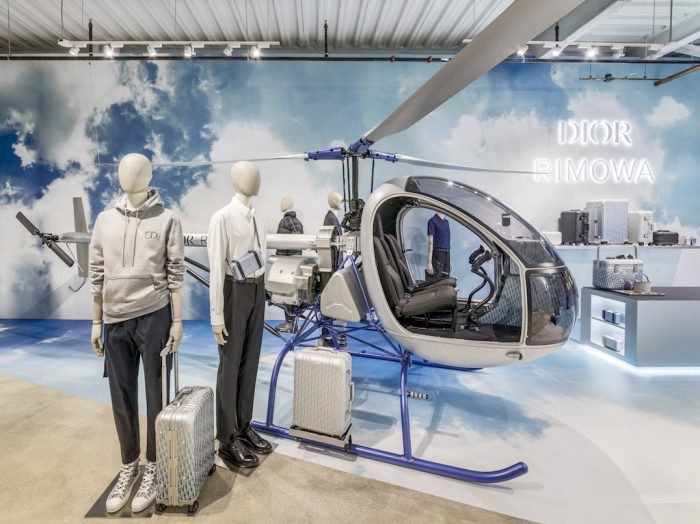 Dior and Rimowa pop-up at Harrods

Dior and Rimowa are bringing their new retail concept to London, with a pop-up slated to open in Harrods run until Feb. 2.

The new space mirrors the concept first unveiled in Dior’s Champs-Élysées boutique in Paris: It comes complete with a real aluminum gray helicopter featuring seats that are upholstered in the recognizable Dior Oblique canvas, while in the background, walls are printed with clouds and blue skies, a symbol for “new horizons.”

Since making its Paris debut, the concept has since traveled to the Parco department store in Tokyo, SKP in Beijing, Dior stores in Dubai and Hong Kong, plus a dedicated pop-up in Miami’s Design District, before making its way to London — an important stop for the house, given its significance to Christian Dior, who always drew inspiration from the city.

On display at the pop-up will be the “Cabin” and “Trunk” suitcase, as well as the smaller “Hand Case” luggage and the popular clutch style, all created as part of the tie-in between Rimowa and Dior’s Kim Jones.

There will also be pieces that are exclusively made-to-order, including a Champagne case designed to hold one bottle of Champagne and six Dior Maison Champagne flutes, as well as a selection of classic items from Jones’ men’s range.