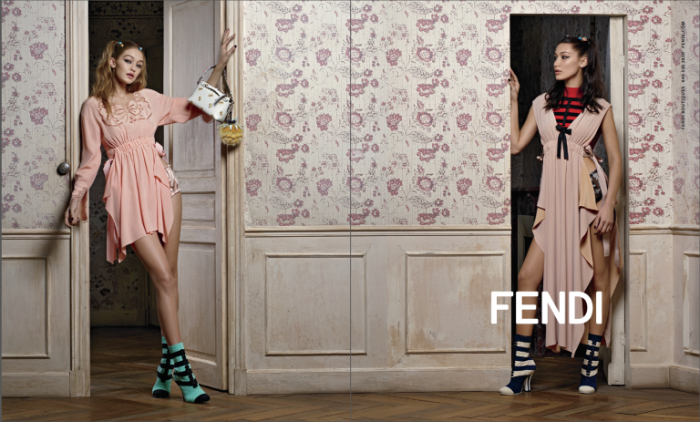 The youngest of the Hadid sisters has been signed up to showcase the spring/summer 2017 collection from Fendi, first unveiled at Milan Fashion Week in September 2016.

The partnership comes as no real surprise as she was chosen back in September to open the label’s runway show, in which she starred alongside her sister Gigi.The campaign, shot by the fashion house’s creative director, Karl Lagerfeld, features the star model in a nipped-waist dress finished in a brocade fabric with a retro wallpaper vibe. This kind of motif is mirrored on the walls that serve as the shot’s backdrop. Accessories have a prominent place in this first campaign photo, notably featuring sock-boots, as well as leathergoods and retro-style shades. Fendi leaves nothing to chance when picking faces to front the brand. For the Resort 2017 collection, the label called on Stella Maxwell and Vanessa Moody, and for Fall 2016, it bagged Kendall Jenner. In other words, the Fendi campaign comes as something of a confirmation for Bella Hadid and her rising star status. Hadid was named “Model of the Year 2016” by the specialist website Models.com, picked by a panel of 250 fashion industry experts including, designers, stylists, editors, photographers, make-up artists and casting directors.