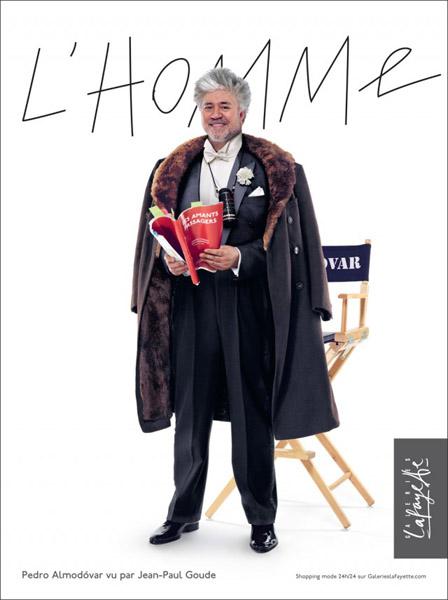 Spanish filmmaker Pedro Almodovar will be the new image of the celebrated Galeries Lafayette in its upcoming ad campaign for menswear, the company said here Monday.

The director will appear on a poster for the exclusive French department store in a photo taken by Jean-Paul Goude for the campaign that will launch late next month, Galeries Lafayette said in a communique.

The Spanish director poses in front of a director’s chair in the image lensed by Jean-Paul Goude.

In the advertising, Almodovar appears standing in front of a director’s chair holding the script of his next movie, “I’m So Excited” (“Los Amantes Pasajeros” in Spanish), which will premiere in France next month.

“That his “extraordinary personality,” his “avant-garde spirit and awareness of style” make him a perfect fit for the chain store’s philosophy.” Galeries Lafayette

The look was inspired by Serge Diaghilev, founder of the Ballets Russes, a hero to both Goude and Almodóvar, Galeries Lafayette stated. The campaign will break at the end of March in outdoor media, store catalogues and online