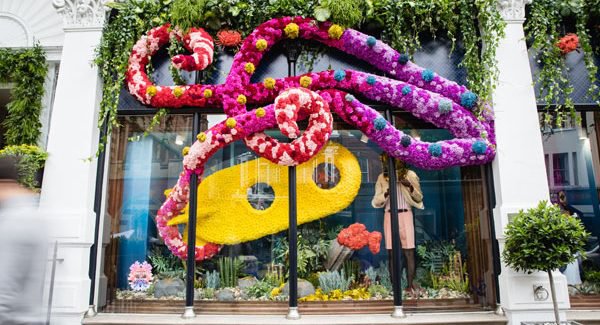 Cadogan, in association with the Royal Horticultural Society, has announced this year’s Chelsea in Bloom winners.

Chelsea in Bloom, London’s largest free flower festival, is in full swing and the SW3 and SW10 postcodes have sprung into life with colourful creations.

More than 90 shops, restaurants and hotels participated in this year’s event, from Sloane Street, Pavilion Road and Duke of York Square to, for the first year, the iconic King’s Road, which celebrated its re-launch in 2019.

Each participant interpreted the Under the Sea theme in their own unique way to compete for the annual coveted awards, and this year’s winners are:

Voting for People’s Champion is decided by the public.

Sloane Square will once more become home to an Information Point (to book a free rickshaw ride or walking tour of the area’s highlights), pop-up bar area and central floral installation – a coral reef complete with giant dolphin made from mixed foliage, and an octopus with tentacles of celosia heads and pincushion proteas, created by florists All For Love London.

Another large-scale floral installation making up the spectacle is a giant 4m Orca Whale situated on Pavilion Road, created out of tropical leaves jumping out of a base of mixed shades of delphiniums, hydrangeas and frothy gypsophila.

At the end of the week, flowers and plants will be re-used and re-homed wherever feasible by the charity Floral Angels.

Dior pop up store in Ibiza